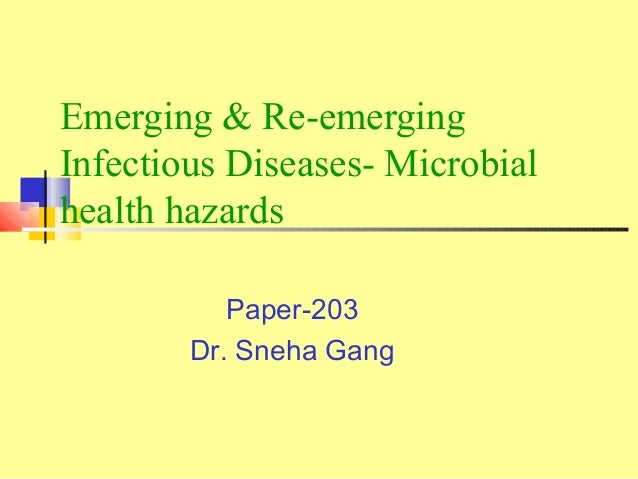 Infectious diseases are a major cause of death, disability and social and economic turmoil for millions around the world. Poverty stricken countries lack access to health care. Reports show that in nations with the lowest economic status the causes of death are primarily infectious and nutritional diseases.

Respiratory infections like the flu, pneumonia, diphtheria, and tuberculosis and gastrointestinal illnesses like dysentery and viral diarrhea kill children and adults most commonly in these countries. Unlike the United States, many children in these poor countries do not survive childhood diseases like chicken pox and measles.

Very crowded and poor living conditions make the people living in poverty vulnerable to infectious diseases such as tuberculosis and cholera.

Poor nutrition and poor immune systems are high risk factors for several major killers including lower respiratory infections, tuberculosis and measles. In these poor countries there is limited access to health care.

For example according to table In a poor country such as Ethiopia there are as many as 36, people per doctor This means that for each person in the country to get seen one time a year every doctor would have to see over patients a day every day of the week.

Limited access to drugs makes treatable conditions like malaria, HIV, and tuberculosis fatal for the poor. The most prominent infectious diseases in developing countries are malaria, schistosomiasis and trypanosomiasis.

Malaria is the leading cause of death in tropical countries. More than one million deaths occur each year. Malaria is a vector borne parasitic infection.

It is caused by a parasite that is transmitted through the bite of the Anopheles mosquito. Plasmodium is the causative organism.

People infected with the parasite that causes malaria could experience weeks or months of bad health. Children and pregnant women are less likely to recover than adults who have built up immunity to the disease.

Malaria has increased a lot in Africa and other tropical and poverty stricken areas. Plasmodium has become resistant to chloroquine which is the antimalarial drug. A recent report showed that nearly 25, childhood deaths per day are due to only seven infectious diseases.

These include malaria, pneumonia, diarrhea, measles, whooping cough, tetanus, and tuberculosis. In many of these deaths, malnutrition is an influencing factor. In developing nations, the lack of safe drinking water, not enough food, poor housing, and poor sanitation are all factors in the high rates of infectious diseases.

In the urban life, too many people are crowded into small dirty areas. Airborne infections are virtually everywhere. Disease carrying nasty animals are everywhere. Flies, rats, cockroaches, lice, and mice are common.

In rural areas infections like typhus and yellow fever and Chagas are common. The opossum carries Trypanosoma cruzi, which does not cause it to get sick. However, when a bug bites it and then carries it to a human it is fatal.

The Triatoma bug is found in Latin America and carries this disease. These poor people in Latin America live in thatched roofs and dirt floors, just where the Triatoma bug thrives.Health protection in schools and other childcare facilities A practical guide for staff on managing cases of infectious diseases in schools and other childcare settings.

Published 18 September The Department of Infectious Disease Epidemiology, Imperial College London has been the world leader in mathematical modelling of the epidemiology and control of infectious diseases of humans and animals in both industrialised and developing countries for 20 years.

It hosts the MRC Centre for Outbreak Analysis & Modelling, UNAIDS Epidemiology. Infectious diseases are illnesses caused by germs (microbes). It is important to realize that not all germs (bacteria, viruses, fungi, and parasites) cause disease. In fact, a host of bacteria normally live on the skin, eyelids, nose, and mouth and in the gut.

These bacteria are called normal flora. Contagious diseases are often caused by the spread of bacteria (such as in scarlet fever) or viruses (such as in chickenpox, measles, hand-foot-and-mouth disease, and quite a few others) in droplets of saliva and mucus, especially when coughing or sneezing.

TB is contagious and is transmitted through the air from a person with the active respiratory disease and then another person inhale this infectious droplet.

The Infection Control Management of Infectious Diseases table is intended as an informational guide only.